The Search for “Planet Nine” 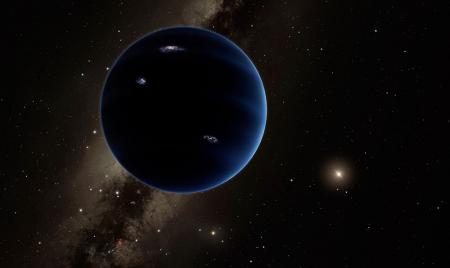 In 2006, a team of astronomers at Caltech discovered Eris, the only trans-Neptunian dwarf planet whose mass exceeds that of Pluto. This discovery led directly to the demotion of Pluto from planet status, bringing the number of known planets in our solar system back down to eight. The man who led this team, Michael E. Brown, has since referred to himself as the “Pluto killer.” He tells the story of his contributions to Pluto’s demotion in his 2010 book How I Killed Pluto and Why It Had It Coming.

Now, ten years later, there is some poetic irony in the fact that Michael Brown is one of the researchers whose work may ultimately result in bringing the number of known planets in our solar system back up to nine.

Brown, along with Caltech astrophysicist Konstantin Batygin, has recently announced the discovery of tantalizing indirect evidence for the existence of a very large planet in the Kuiper Belt region of our solar system. Astronomers have not directly observed it, but its existence has been strongly inferred by the observation of anomalous gravitational influences that have been analyzed with the aid of computer modeling. If this analysis is correct, the researchers say there should be a planet ten times the mass of Earth moving in a highly unusual elliptical orbit which takes it approximately 20 times farther from the sun on average than Neptune. This places it in the “scattered disk” portion of the Kuiper Belt region.

The evidence comes in the form of anomalous orbital movements of a group of six distant Kuiper Belt objects (KPOs), which exhibit inexplicable dynamical clustering in physical space. At the outermost extremity of their orbits, all six KPOs travel around the solar system at different rates. Yet they also point in the same direction and their orbital planes are all tilted downward in the same orientation. In their joint Astronomical Journal paper “Evidence for a Distant Giant Planet in the Solar System,” Batygin and Brown calculate that the probability of this alignment happening by chance is about 0.007 percent. This leads them to hypothesize that something with ten Earth-masses must be shaping their orbits.

Visual confirmation is still needed to confirm this object’s status as the ninth planet in our solar system. Getting this crucial visual confirmation could take years, for two reasons. First, the object’s orbit takes between 10,000 and 20,000 years to make one full orbit around the Sun. Getting visual confirmation will require seeing at least a part of this hypothetical object’s slow movement against the background stars so astronomers can confirm that it has the orbit they predict it should have. Until that is done, all we can say with confidence is that there is something out there that is ten times the mass of the Earth which may or may not be a bona fide planet. (For example, one alternative explanation, recently aired by postdoctoral astrophysics researcher Ann-Marie Madigan at the University of California, Berkeley, suggests that the mysterious orbit-shaper could actually be the collective effect of a “self-organization” phenomenon in which several small planetoids with a combined mass equal to that of Earth produce the observed strange dynamics.)

The second reason direct visual observation could be years away is simply due to the huge distance separating Earth-based observers from the Kuiper Belt. Whether or not our Earth-based telescopes can capture a decent image of Hypothetical Planet Nine is a debatable question. Remember that this thing is calculated to be on average 20 times farther away from the Sun than Neptune. To put this problem into perspective, consider that Pluto, which sometimes crosses the orbit of Neptune because of its highly elliptical orbit, registers as only a dim speck of light in the largest of our Earth-based telescope. And it may take several decades to launch a probe that can get close enough to Hypothetical Planet Nine to capture a high-quality image.

A new, ninth planet in our solar system would be an extraordinary and extremely rare find. The Caltech news report on this find quotes Brown as saying, “There have only been two true planets discovered since ancient times, and this would be a third. It’s a pretty substantial chunk of our solar system that’s still out there to be found, which is pretty exciting.” The peer-review directed at the interpretation of the available data needs to be proportionately rigorous. The “Planet Nine” hypothesis is reasonable and plausible. But it’s also possible that the planet hypothesis could go the way of faster-than-light neutrinos or the early premature reports of gravity waves from the big bang, both of which turned out to be duds when scientists applied proper skepticism to the work before them. We just need to wait and see and not let hope interfere with the work to be done by astronomers and our evaluation of that work.

I am a godless skeptic and lover of science. I studied investigative journalism and philosophy at Southern Oregon University, and I am currently writing freelance while in search of a niche. I am a voracious reader, movie buff, and classic rock aficionado.

Read more about me here.